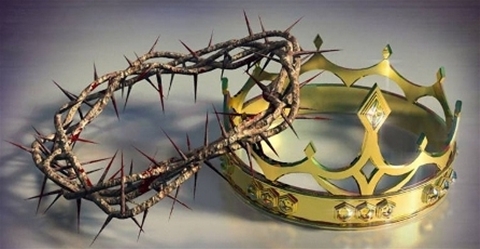 That’s why I say if you’re looking for the supreme example of true leadership don’t look to a football manager, politician or a business mogul. Look at Jesus Christ.

Jesus was an extraordinary leader. Just think…it’s 2000 years since he walked on this earth, yet over 2 Billion people right now around the world who would say they are Christians.

This morning I was blown away as I read one short passage in the gospel of Mark that holds for me Jesus’ THREE secrets to what he called great leadership.

Mark 10:32-45 starts by saying Jesus and his disciples were on their way to Jerusalem and Jesus was leading the way. Even though he knows and then predicts that there is pain, betrayal, a cross and a grave awaiting him. it says he was ‘leading the way.’ That’s what great leaders do. The first secret. Get going.

Nobody can follow someone going nowhere. if you stay still, nothing’s going to change. Motion matters. Have you noticed how much easier it is to direct something that’s already in motion? Get going. Even though it’s scary, when you look over your shoulder others will follow your realistic and courageous example. Even into a daunting future.

No sooner had Jesus informed his team that he will soon face mockery, spit, a whip, and death, than two of them step up, thinking WIIFM! (What’s In It For Me?).

Rather than listening to Jesus (much less try to comfort him and express loyalty), James and John make a power play, staking their claim for what we often think leadership is about. Power, position and prestige.

They were not so different to us and lived in a world like ours. Caesar ruled with an iron fist, Herod sat on a golden throne. Power, position, perks. Titles, treasures and entitlement. The better you are, the higher you get, the more reward, awards and applause you received – for you.

So Jesus grasps this teachable moment for them and us. He spells out what true leadership is all about. “Whoever wants to be great, must become a servant.”

During a recent conference I spoke at in the USA, they interviewed a man who is teaching and reaching university students in the Czech Republic. ‘How do you know it’s working? How do you know you’re educating great leaders for the future?’ were some of the questions asked.

“We put on a meal at our home at the start of year one and invite them. It’s well attended because it’s a feast. They push to the front of the queue, load up their plate with all the best meat. Fill up their glasses, grab all the best desserts, then scoff it in a corner and leave ASAP.

But by year 3, if they have really learned from us, the students we’ve worked with come to our home to talk. They’d eat but not over indulge. They’d have learnt to share, and help tidy away at the end. They’d serve. ‘That’s how we know our leadership training is working.’

Be first to serve, that’s great leadership. Great leaders make the most out their own lives by making the most difference in the lives of others.

What else makes a truly GREAT leader?