I have been to Orlando, it’s a fun place. I went for a conference and that was work so Zoe told me I couldn’t go to Disney or have too much fun. But I still had some fun.

It’s not a scary place. I walked around in the evenings and felt fine. Maybe it’s the ex-cop thing, but I’ve been in many far tougher places around the world over the years and I generally don’t feel scared walking around anywhere.

I don’t know about you but I find it harder to pray for places I’ve never visited when I hear terrible news on the TV (and there’s just so much of it). Perhaps the fact that I have been there makes it easier for me to pray for the city, and weigh heavier on my heart. I imagine the terror in those moments of those inside the club, I think of the families involved who now mourn lost children or relatives, or maintain waiting vigils at their bedsides hoping and praying they pull through.

If I hadn’t ever been there, I would try to imagine perhaps what I’d have felt like if this had happened on the streets of my own city and it just so happens that 20 years ago this week the streets here ran red with blood when the IRA bombed Manchester.

But there’s something different about Orlando. Not the place, the target. And I’m surprised when I hear pundits say differently or try to wriggle around it as they did when Owen Jones walked out of that now infamous newspaper review.

It wasn’t just an attack on ‘humanity.’ They happen too. But if ever there’s a definition of a hate crime, surely this was it. It was more like someone turning up in Manchester and deciding to attack a pub in the gay village. 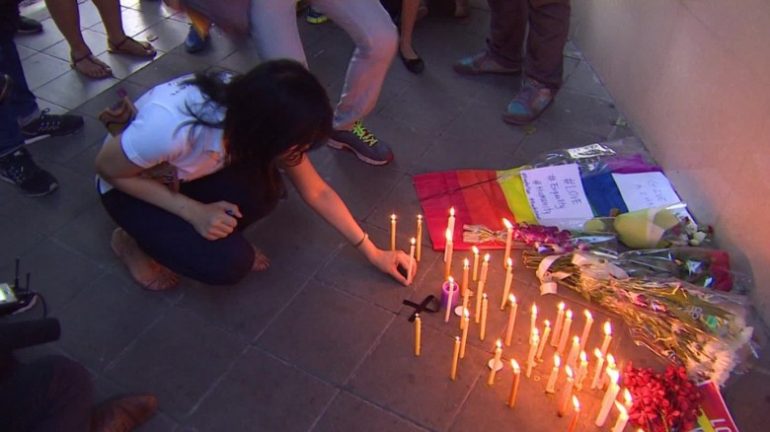 And what I read and see and hear since then has helped me see, that the people there, aren’t like me. Before you start typing angry comments for that, please keep reading!

Here’s what I mean is different. I’m talking about what I wrote earlier, how I don’t feel scared walking around. On my own, or with my wife.

Many LGBT people are commenting that they do. They’re scared. Scared they’ll be hated. Many have felt that fear all their lives. I never have. That’s why a place like Pulse exists. To try to provide a place of safety and belonging – for people made in the image of God who He loves with an everlasting love, people who Jesus died to save, but who often don’t feel safe, or that they belong, except together.

And that makes me really, really sad.

I think it makes Jesus sad. I think it breaks God’s heart.

Those using this time to argue their points about the rights and wrongs of biblical interpretation are fully missing the point. Twenty years of pastoral ministry has taught me that when people are grieving that’s about the very worst thing one can do.

I know for sure the Bible tells me to mourn with those who mourn so, I want to do that as I pray for Orlando.  And I want to pray for myself, while I’m there and He’s listening, I usually do:

‘Please Lord, make me more understanding, more welcoming, kinder. Give me a more tender heart. Help me to really love people, as people, in the name of Jesus, while we still have time– and right now as I continue to pray for Orlando (as we will do this Sunday in our services at Ivy). May your peace reign, and your Kingdom come. Amen.’