If we’re looking to multiply – how does that work?

Today at Ivy Kingsway Ben announced that that church in the Cinema is going to double. It’s been full for too long (not a problem most churches experience), a number of plants have gone out from it, and from Easter Sunday they’re going to try two services, which means the word nobody except babies like – CHANGE. Change is often perceived as pain, until growth happens. This got me thinking about how the Lord doesn’t just change or grow us, but multiplies, but it looks like subtraction.

In John 12 read about how some Greeks came, wanting to see Jesus:

20 Now among those who went up to worship at the feast were some Greeks. 21 So these came to Philip, who was from Bethsaida in Galilee, and asked him, “Sir, we wish to see Jesus.” 22 Philip went and told Andrew; Andrew and Philip went and told Jesus. 23 And Jesus answered them, “The hour has come for the Son of Man to be glorified. 24 Truly, truly, I say to you, unless a grain of wheat falls into the earth and dies, it remains alone; but if it dies, it bears much fruit. 25 Whoever loves his life loses it, and whoever hates his life in this world will keep it for eternal life. 26 If anyone serves me, he must follow me; and where I am, there will my servant be also. If anyone serves me, the Father will honour him.

The context here? Jesus is going to be killed. He chooses this. Nobody forces this. The shadow of the cross is on him. He has a mission to do.

The Greeks are saying, ‘Come with us, be our teacher.’ It looks like a great ministry offer.

Jesus says, ‘No, my purpose is not to remain alive.’

And this is not about saving biological life. It’s about having a name, making a name for yourself.

Jesus defines following him as walking in his footsteps.  The Bible tell us, ‘Jesus suffered for us, leaving this example that we may follow in his footsteps.’ And he’s not in a rush. He waited thousands of years in heaven before he came to earth at ‘just the right time.’
He waited thirty years where people were in crisis and tragedy all around him, walking through it all as God enfleshed on earth.

But then the day comes, for a death that leads to life. He goes to an appointment with a watery grave – meeting John the Baptist, where he is baptised, pictorial for us now as dying and being born again.

Then he goes and spends a long time alone with God, before he puts another foot forward. Because when ministry becomes the sign of spirituality – you’re in trouble.

From beginning to end, living for Jesus is all about dying to self. Little things that upset our routine are good practice for dying, if we let them be.

Dying to live is a lifelong process.

How does the Lord multiply?
Jesus took bread and fish and multiplied it. How? Picture that happening in your mind.

He took it, held it, broke it, and blessed it- then he gave it all away. There was enough. Everyone was full, and there were even lots of leftovers. 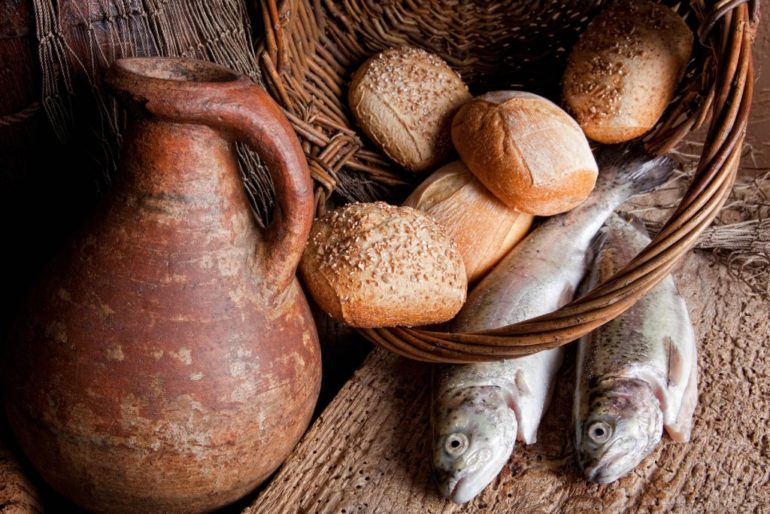 PS – If you’re interested in finding out more about the Jesus way of subtraction, addition and multiplication, those subjects and others are dealt with in my book ‘Work It Out!’