I blogged the morning of the bombings about how as I discovered the news about the brutal attack at the Manchester Arena I realized I was walking around with my fists clenched, and how it’s hard to pray with your hands like that. Later after we opened the church for prayer to the community and as I looked at the cross, nail pierced hands opened mine to grace.

But as more details emerged, my heart began to clench.

Ivy is a church with many medics, some very senior. I kept in touch as well as I could with our guys. They have worked 16 and 12 hour shifts “saving lives and limbs” as first priority but nothing but a warzone could prepare many of the staff, though used to appalling injuries. Extracting the nuts and bolts of evil, trying to convince wounded parents to receive treatment themselves when they only wanted to be patched up and be with their injured children. The calculated manner and premeditated maliciousness of deadly intent to maim the most defenceless young families.

I hate it. God hates it. It’s murder.

But it’s only terrorism if you let it terrorise you into living in fear or hate. That’s how they win, when you give them what they want.

So I walked down to the Didsbury Mosque. It’s on our street, five minutes walk from Ivy. I first called to see the Imam four years before when Lee Rigby was murdered to extend a hand of friendship.

He was not in, but the men inside looked shocked and said they were horrified by what had taken place. ‘This ISIS – is not us!’

But on Facebook, links and comments were appearing to the contrary.

I tried to get into Manchester for the vigil that evening but was thrilled to not be able to get anywhere near as the streets for miles around were packed. Seeing thousands of my fellow Mancs united in grief later, I know we’ll rise up stronger. We do things differently here.

I had been invited to a united prayer meeting in the city centre and it was good to be with  fellow church leaders. We ran the gamut of emotions as we were honest to God and cried out together, ‘Lord have mercy on Manchester.’

When I was in the Police (here in Manchester for ten years) I didn’t cry. You learned back in the day do your duty and fulfil your responsibilities, you can deal with you later. Some of the sights I saw I’m still not sure I ever dealt with. I learned to cry better when I became a church leader.

I still couldn’t cry when I came back to our church and found it open late into the night with people having visited all day, candles burning and prayer post-its on the map of Manchester. I was outwardly focused on who was there. We had a Muslim lady call in and write a prayer too, ‘Is there anything we can do?’ she asked. Who knows?

Next morning  the tears came and now were hard to stop. I heard more details, saw real names and faces, reading about mums who feared the worst having those fears from the atrocity at the concert confirmed. Unbearable.

This was compounded by the news that the perpetrator had attended that same Didsbury Mosque. I know it to be a very liberal and open place and was amazed. Then I read that the Imam said he had known the killer and feared he may have been becoming radicalised after he had preached against ISIS and‘He gave me the face of hate… and would not greet me.’ (News today emerges that the intelligence services were warned by members of the community).

The fists were clenched again for most of the morning. Whenever I tried to talk to God about how I felt, however, a memory would resurface.

A few months ago a strange thing happened at Euston station. I was busying through like everyone else when I saw an orthodox Jewish man holding up a sign that said ‘Free Hugs.’ I made a beeline for him, and that close embrace with a total stranger dropped something into my heart. It was a moment I don’t think I’ll ever forget.

Finding it hard to pray and process still, I went to the gym, I punch a punchbag there a lot. It turns the other cheek.

In the car park I saw two young bearded men in their early twenties getting into a car. “Excuse me, are you Muslims?” They stiffened. Looked at each other. “Yeah. Yeah we are” they said, nervously defiant for what might come next.

I hugged them. They hugged me back. It was good. They drove away waving, nodding, beaming from ear to ear.

Maybe I was onto something?

I hugged another guy in the changing room at the gym. Never thought I’d write that line to be honest. “Thanks mate, that means a lot.” He said.

I talked to a lady in the café there, she teared up. She wasn’t a Muslim but I figured that was okay so I hugged her too. I hugged one or two more people that afternoon.

It’s hard to hug with clenched fists. And hugging opened my heart up too. I went back to our church later and hugged a few more people. Then I went down to the mosque and some press were outside, and police on guard. Nobody looked up for hugs, but I talked to some people again and left a letter for the Imam expressing support.

Then I saw that some links and comments off my blog and on Facebook to some southern bloke who had driven up to Manchester especially. He did not come to comfort my city but to encourage me to hate its citizens. He was spouting and shouting outside another mosque a few miles from here, pointing at the enemy within. Links and comments followed inciting me to be a true patriot ‘soldier’ against that foe. But real soldiers and other armed services know the object in any arena is not war making but peacekeeping.

I was so inspired by this gentleman’s rhetoric I decided to leave the house again stand outside the Didsbury Mosque myself, as evening prayers began. I made a sign. Hugs Not Hate. 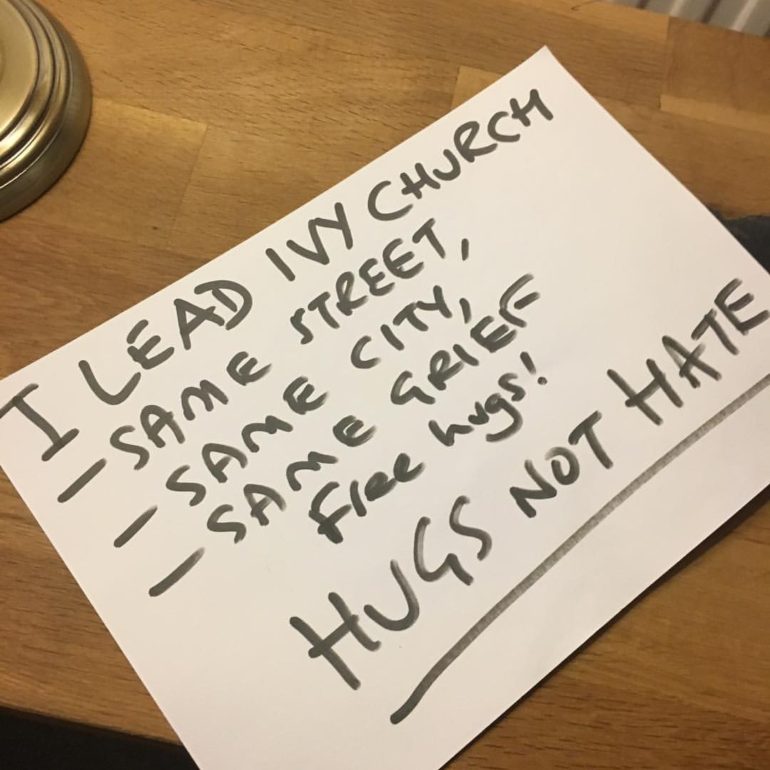 Again the police were there, and a couple of men from the Daily Mail hung around. They didn’t want to talk to me as a local minister, no doubt preferring a nice balanced approach to events as always.

People approached the man with the sign warily. What kind of protest was this?

Some had brought their young boys along. But when they read the sign they said to them, “Hug him! Hug this man!’ I’m not sure how much the boys were up for that, but the Dads were.

I hugged about twenty men on the way in and most of the rest when they were coming out. Hug A Muslim day had reached over 50 and I only started at lunchtime!

I chatted with the police and thanked them for their work. I wish there were more of them, GMP has been decimated by cuts and I know from so many ex colleagues how low morale has been for years, yet they truly soldier on. One was a Muslim. He went in for prayers with his brothers.

Afterward I was invited in for refreshments and sat a while as they scratched their heads and tried to come to terms with what has happened.

“I have been at this mosque eight years,” said a dentist who lives nearby, Manchester born and raised. “It’s the most liberal and open I have ever known. This has undone all of that.”

The Bible says “Do not be overcome by evil, but overcome evil with good.” What does that mean in practice?

Every Sunday afternoon, Didsbury Mosque has an open hour for visitors. I’m going to encourage hundreds of people from our church to go with me this week and get their hug on, too.

#Hugsnothate – it could go viral, I wonder what would happen if it did?