I couldn’t open my mouth to say to Zoe, ‘Of course I’m not going to be sick’, just in case. A  minute later I was so sick, so loud, my son heard me from upstairs and thought I was shouting with rage. That was two days ago and I’m sitting on the couch now feeling queasy with a ‘just in case’ bowl next to me.

I had my gallbladder removed a few days back. Now I have an impressive array of stab wounds across my abdomen. One day the grandchildren may believe this was from when Poppa fought in the war so we all could be free, and I’ll never know how they came to believe such a thing.

But finally feeling well enough to concentrate on something other than Netflix (hours I’ll never get back) I thought I’d pull together some ramblings and if it doesn’t make sense put it down to the tablets.

I never thanked God for my gallbladder, till it was gone.

What a great title for a country and western song.

I probably knew I had one, but until it went wrong, nobody even noticed what it did. I fully admit to just taking the little fella for granted. 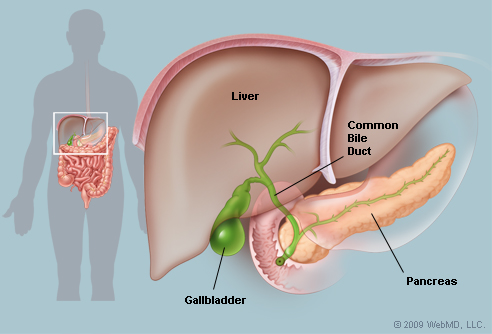 I’ve actually been fairly ungrateful to (and for) all my internal organs while I’m getting this, er, out of my system.

I don’t know if the colours above are representative but I like to hope the gallbladder was never the most attractive part of me. However, when I ate, it poured bile on food. On fat. All those curries. Not a pleasant job. For over 50 years. Unnoticed, morning, noon and night.

Tucked away behind Mr Liver who grabbed all the glory in that part of the digestive system anyway.

Maybe it thought at times, ‘Well at least I’m not common, like Bile Duct.’

Perhaps that’s why one day it started to calcify…

In 1 Corinthians 12 The apostle Paul wrote about how everyone’s important to God, whether they’re up front or seen only by him.

‘Can you imagine Eye telling Hand, “Get lost; I don’t need you”? Or, Head telling Foot, “You’re fired; your job has been phased out”? As a matter of fact, in practice it works the other way—the “lower” the part, the more basic, and therefore necessary. You can live without an eye, for instance, but not without a stomach. When it’s a part of your own body you are concerned with, it makes no difference whether the part is visible or clothed, higher or lower. You give it dignity and honor just as it is, without comparisons. If anything, you have more concern for the lower parts than the higher. If you had to choose, wouldn’t you prefer good digestion to full-bodied hair? The way God designed our bodies is a model for understanding our lives together’

One of the things that happened with the operation being called for this week meant that a number of speaking engagements got cancelled. Guess what? Nobody wept. That helps me gain some perspective. I sometimes get to speak in a ‘prominent’ way at some ‘significant’ events.  But that doesn’t make me important. God made me a mouth, and sometimes gives me words. I work hard at that, because it matters. But the behind the scenes stuff matters too. It doesn’t matter more, or less. What matters is that it all works together.