I know that will annoy some people. Some people who know me think I already think big enough – but I don’t think God agrees. He’s been growing my vision and faith recently.

Other people think small is beautiful. I agree.

But bigger is beautifuller, when it comes to thinking.

Some years ago I read a book called ‘The Present Future’– and I hated it. Why did I hate the book?

It was like going to the Doctors and hearing that while you may look okay, just about everything is wrong with you, you’re really unhealthy and on the way toward slipping off the plate; then being told various obvious things that if you did them, would avoid that fate; but not being allowed to do them.

It was like a mechanic looking at the engine, ‘Here’s what’s wrong with your car and here’s what you need to do to fix it,’ but while you really want that to happen, you know you can’t. It’s not possible.

At the time I was leading an institutional church, with great people, meeting locally and impacting regionally.

But that was the problem. I was ‘off parish.’ So, I was under a cloud.

What mattered to the leaders maintaining the decline was the structures, which had to be maintained, even though they had become strictures.

You can’t keep growing your church, you certainly can’t plant any more, it’s not gentlemanly.

It was like wearing shoes 5 sizes too small and being told you’ll get used to it. And the worst thing is, I very nearly did.

I very nearly settled for a bit more growth, and not rocking the boat.

But books are dangerous things if you want to keep thinking small. Reading that book and others by people like Alan Hirsch and Roland Allen, and getting more and more frustrated, I wanted to operate as ‘a man under authority’ but the powers that be frowned on me as a rebel, and nearly succeeded in making me a ‘conformist.’

For years I hung on in there, being told by friends who wanted to do things differently too but were also locked into that system things like, ‘You’ve got to be in in to win it.’ Hirsch quotes Upton Sinclair: “It is difficult to get a man to understand something, when his salary depends upon his not understanding it!“ We’re meant to be the church that rocks the nations, and I was getting scared to rock the boat.

Until this time of year, five years ago. After our biggest and best Christmas service ever, with a fabulous team of loving people working together so we saw more people than we could handle coming to hear the gospel, packing the place out, with many ‘making decisions’- but I knew I needed to make one too.

I walked home that night dejected rather than elated as I realised, what we were doing couldn’t bring about much change other than on an individual level. Like Sisyphus I had just rolled the rock up the hill again and again, but it kept rolling back, and one day it would flatten me- like it had flattened a lot before me. 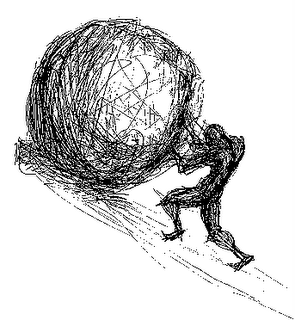 So, I stepped sideways.

I had to be willing to lay everything down and just trust God to provide (like I said I would when this whole ministry thing got started), and guess what – he is sooooo trustworthy.

Weirdly, I still hold credentials from that denomination (maybe they’ll take it back after this?). I love and pray for its future, I honour so many great people doing some amazing work therein.

But go on and ask me how it feels, to lead a church that can and is becoming at the centre of a missional reproducing network, to be able to freely move around the city, the region, and soon the UK, planting churches small, medium and large, coaching leaders who are making more and more impact in the world and helping more and more people find their way back to God.

Whatever else happens in my life I want to be a part of that new thing, and now I feel FREE to do so.

If you want to join me in dreaming about that – maybe even be a part of it – get ready for NEWTHINGUK.