A quick announcement that this is my first blog as one of 100 ‘Charter bloggers’ invited to join the Bible Gateway Blogger Grid – hence the hashtag. I’m honoured to be asked by the most visited Christian site in the world which gets 120 million hits a month – selected for being someone who encourages people to get into the Bible. 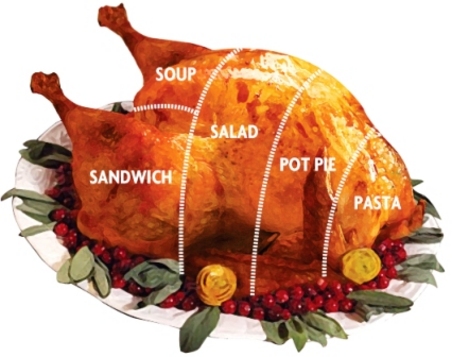 I know, it’s a first world problem for sure – but even so by now, turkey and sprouts have definitely lost their appeal.

Under the sacrificial system in the Old Testament the people were reminded again and again that God is a great King worthy of the best sacrifice and he not only asked for but expected they would present for him “an animal without defect.” Why? Because all those sacrifices prefigure the perfect sacrifice of Jesus on the cross that would bring us home to know the love of God.

In a couple of weeks at Ivy I’m going to be speaking about the difference between Cain and Abel’s offering – and why the attitude of leftover giving left God cold.

Why would God say that? Because the temptation would still be there for us wouldn’t it? To go through the herd looking for what you could give, one from my herd’s just going to be sacrificed. It’s going up in smoke anyway! So grab the scrawny, scabby, one eyed, three legged, stubby runt of the litter (called Lucky) and say, ‘This’ll do!’

But God always gives the best. He gave US his very best didn’t he? After all, he gave us JESUS! The Bible says he ‘gives us all things richly for our enjoyment.’ We only ever give BACK from what he already gave, so – do we want to give him the best in return?

God was getting tired of people giving leftovers, thinking, ‘That’ll do’ instead of ‘What’s the BEST I can do?’

Do you ever think, “This’ll do!” When it comes to God? Let me be specific in application for a minute – because most of us haven’t got sheep. But you have got money. That’s your commodity of exchange. When the plate comes round if that’s how you usually give to the things of God – do you ever wonder, “What’s the least I can give, and it still be okay?”

Be honest! I’m talking about looking for the LEAST we can give, rather than the BEST. God wants his people to bring him the FIRSTFRUITS. That means you give the best, first.

All through the Bible there’s this call from God where he says, “I’m going to be your provider now. I’ll look after all your needs and you can trust me. Just give me the firstfruits, I’ll look after the rest. Trust me.”

Jesus told his followers in one of his most famous recorded talks that they shouldn’t worry like everyone else about questions like, ‘What will we eat, drink and wear?’ Most of our worries fall into one of those boxes don’t they?

You focus on HIS KINGDOM. When we do, we learn contentment and trust that our physical needs will be met. He says seek FIRST the Kingdom of God.

What does that mean? It means focusing on the things God is interested in. Advancing the gospel. Fighting poverty. That’s the Kingdom! What if your focus today was instead of worrying how to make a living, you thought FIRST about GIVING?

Giving FIRST, then living. We don’t think like that usually do we? But the people hearing Jesus’ words first time around lived in an uncertain world too, and Jesus says “if you make MY KINGDOM priority number ONE, take care of MY needs – the poor and making disciples – I will CERTAINLY take care of yours.”

Imagine what God could do with us if we became people like that. We put GOD and what HE wants FIRST, we give him the FIRST and the BEST in our lives – not the scraps and left-overs, then we don’t worry about where the food and clothing is coming from because he says, “I’ll get that!”

As a church leader I’ve found there are really only two types of givers,  and it’s not a matter of Amount but Attitude: some people give firstfruits, and other people give left-overs.

I’m thinking about this as we prepare for our FIRSTFRUITS offering at Ivy which we’ll receive on 12th January. (We have asked people to reign it in over Christmas so they can give it in, in the New Year). People who give to that at the start of a year are seeing everything differently.

It’s about how you see God – who is your provider?

Left-over givers aren’t necessarily greedy – just FEARFUL, because they see THEMSELVES as responsible for meeting their own needs. With families to feed, stuff to buy, and whatever’s left over (if there is any) goes to helping God’s work in the world.

Firstfruit givers on the other hand ask themselves, “Who is better able to meet my needs – me, or God?” They see that everything belongs to God (including the responsibility to meet their daily needs). So, because they have shifted focus to that other Kingdom, they feel free to invest in his interests first – and trust him for their needs second.

Leftovers or Firstfruits? It’s up to you.