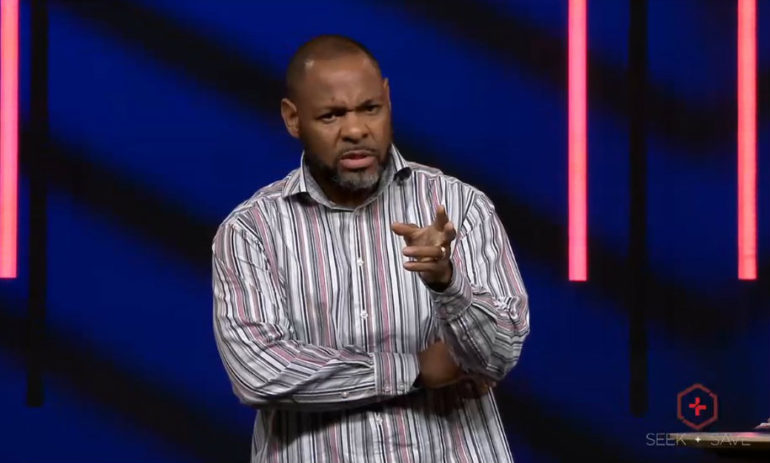 After this, I saw a large crowd with more people than could be counted. They were from every race, tribe, nation, and language, and they stood before the throne and before the Lamb. They wore white robes and held palm branches in their hands, 10 as they shouted,

“Our God, who sits
upon the throne,
has the power
to save his people,
and so does the Lamb.”

11 The angels who stood around the throne knelt in front of it with their faces to the ground. The elders and the four living creatures knelt there with them. Then they all worshiped God 12 and said,

“Amen! Praise, glory, wisdom,
thanks, honor, power,
and strength belong to our God
forever and ever! Amen!”

13 One of the elders asked me, “Do you know who these people are that are dressed in white robes? Do you know where they come from?”

Then he told me:

“These are the ones
who have gone through
the great suffering.
They have washed their robes
in the blood of the Lamb
and have made them white.
15 And so they stand
before the throne of God
and worship him in his temple
day and night.
The one who sits on the throne
will spread his tent
over them.
16 They will never hunger
or thirst again,
and they won’t be troubled
by the sun
or any scorching heat.

17 The Lamb in the center
of the throne
will be their shepherd.
He will lead them to streams
of life-giving water,
and God will wipe all tears
from their eyes.”

We need to see dreams differently. As a child my dreams were fueled by what happened the day I went to sleep. Good day – sweet dreams. If I had a negative experience that would show up in my dreams. Like recently he had a snake in the house. He killed it. But then he started having snakes in his dreams.

So now terrible things are happening all over the world, shootings and terrorism and hate – show up in our dreams. Then we’re like ‘I’d rather not dream.’

In Revelation 7, John is being shown the last days. He doesn’t know how long they’ll last, but then he sees God’s a vision – multi-ethnic, multi-racial, multiplying dream. A multitude nobody can count.

An unlimited dream. Don’t limit what God can do! So stop trying to guess how many are going to be there. There will be a LOT! Here’s who I hope will be there – ME and EVERYONE ELSE. Don’t be limited, by where you are. Town or city or location. Multiply!

We must have a supernatural dream , supernatural vision. Angelic forces. We are dependent on the agency and intervention of invisible forces that surround us. You need something beyond you. For protection. Dream as though we are not alone! Something beyond our understanding is with us. A great cloud of witnesses. Numbering the oppressed and forgotten too. There are people in the vision who have gone through great tribulation. Surely John thought he was going through that time! People in history, people right now who are outcast and hurting.

What does it mean for the marginalized, to be on the front line of church and church planting?

In Kenya, he went to see the Masai and saw the time when the boys were made men. Dancing and singing. He said ‘This is great.’

But that was just the ceremony.

It turns out they had 2 weeks before they’d been circumcised.

And then they went out in a little group and killed a lion and took and wore its mane.

What’s the lion you have to deal with – to step into the dream God has now for you? So you can find your dance in the midst of your community?