I spent a little time this evening looking through a little piece of the history of our church, as I read extracts from the Minute Book of “Ivy Cottage” Mission Hall. 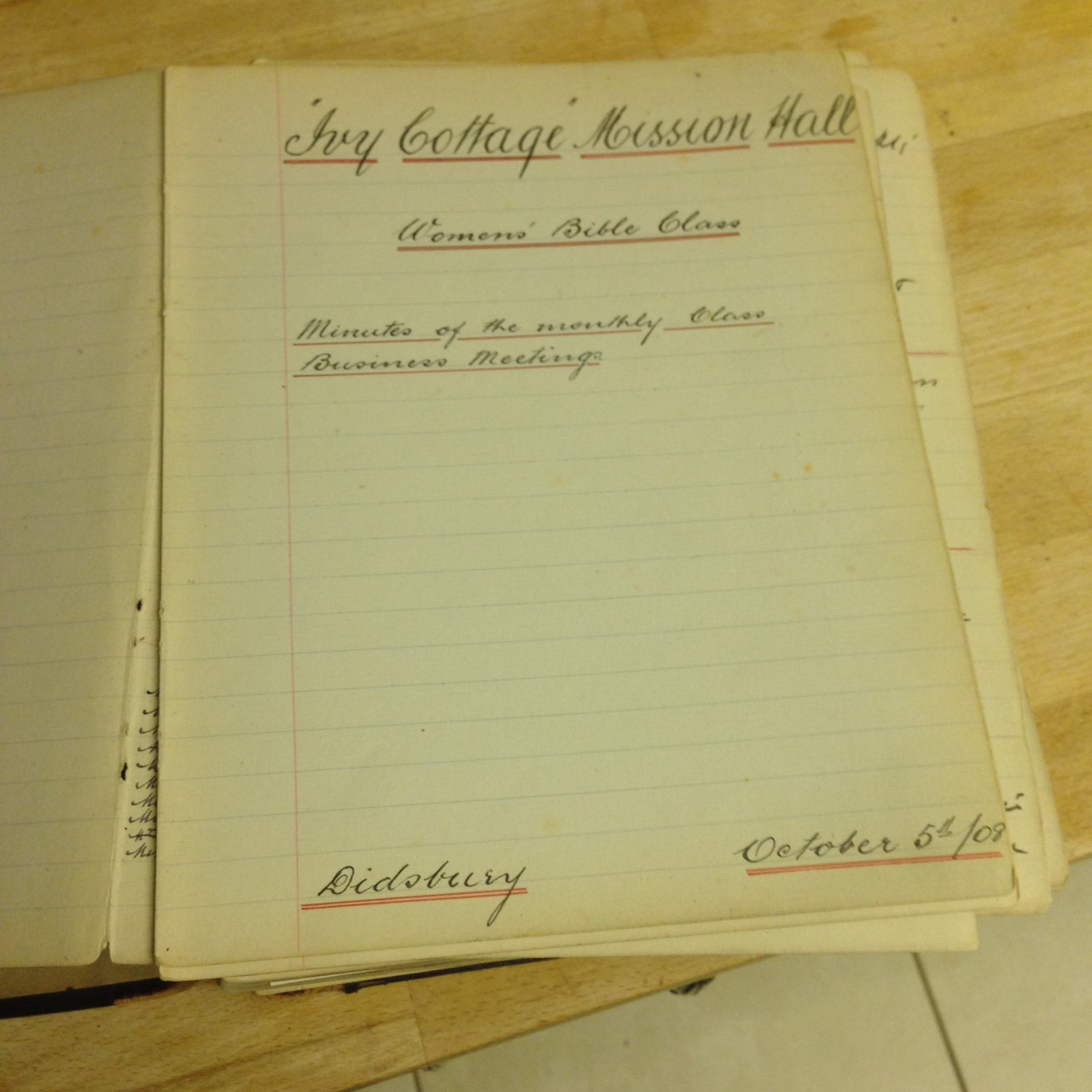 There are some fascinating insights into how Ivy saw itself as a MISSION from its inception, church planting, evangelism, and then that movement became a church as it formalized and hired Pastors to lead it (I’m in danger of doing myself out of a job here) and then started looking at various rules and regulations; and when that happened the pioneering and evangelistic work of women was also truncated. The record speaks for itself and there are some funny things to note along the way.

Many of you will know Ivy started as a men’s Bible study group meeting in a house in 1893. I’ll have to look at their records some time too!

Oct 5th 1908 – Women’s Bible Class held monthly business meetings and had 218 registered members who attended weekly. If they did not attend they were ‘visited’ to find out why, in the September 94 visits were made – this was about the average number of visits monthly for years – reasons for absence ‘away from home, prevented through sickness, or home duties.’

By 1913 there were 257 women, no surprises that it grew, you wouldn’t want to be missed! If you were a member and not attending you would be ‘specially written to.’

From the earliest days the records show a remarkably generous church with mission at its heart, giving much of the income to mission overseas and organizing outreaches.

This book stops there and there are blank pages until…

They agreed that month to do open air evangelistic meetings, and to use an amplifier to do so.

6 Feb 1952 Mr Hunt would be ‘given the liberty to invite speakers and pay their expenses from general funds.’

The same meeting gave away a lot of money to missions, and agreed to arrange ‘an Evangelistic campaign in the new year.’

Mr Hunt ‘referred to the growth of the mission and that it had been suggested that the time might be opportune to change the name… (to) Ivy Cottage Evangelical Church.’ This was agreed, and a sign over the gate was to be made.

‘Luxury coaches’ were booked for the outing to Llandudno (we know always knew how to party), with food included this would cost £1 per adult.

It was agreed that baptism was not a condition of membership but ‘we were happy to make arrangements for those who believed it was the Lord’s will for them.’

8th Feb 1956 when there was no minister in charge…

‘The treasurer stressed the need for more generous giving and asked that more friends consider using the monthly envelopes system as this had been a great help…’ (I refer you to my talk last Sunday morning in the category ‘some things never change’).

The new minister Mr Lamb came in like a lion, ‘stressing the responsibilities of church membership, full loyalty to Christ and his gospel and to the work of the local church’. Membership cards were introduced.

There was a struggling church in Brooklands, Ivy agreed to support and take that over as ‘a daughter church’ on the Brooklands Estate.

He said it was not scriptural to have women serve on the church executive and this would be in the constitution.

A member asked whether the Pastor could make ‘an appeal’ at the evening service, the Pastor stated he would do so when he felt lead to do so.’

A member had asked that the constitution be amended ‘Because

7 ladies spoke in support of this proposal 🙂

A Dr Kerr said that item 2 ‘was very dangerous and the argument used could support many false teachings.’

The Pastor could not agree with Dr Kerr on scripture but said the constitution should stand anyway. The final item that night was that Pastor said the piano in the church was to be disposed of and that any member who wanted it could have it.

The constitution was accepted the following January at the AGM.

In the September of that same year a note from Dr Kerr records that ‘the second Pastor of Ivy Cottage Evangelical Church, the Rev BT Lamb, entered into glory on the Harvest Sunday after conducting the gift day services.’

Reading that has made me a lot more wary of crossing the Ivy women!