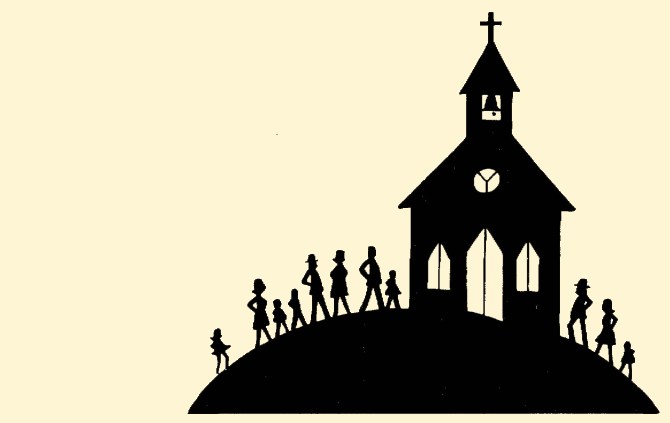 You’ll probably be surprised to hear a church leader saying that.

The papers love to report the decline/demise of ‘Christianity/faith/religion’ in the nation – so any survey that points that way is of course big news.

The truth where I am right now is that actually we actually do have too many people presently attending some of our services at Ivy – this is why we keep planting new ones and this morning had to keep some people waiting to get in the building because it was too full.

I asked the people who came to our building tonight, do you just COME to church – or are you BECOMING church?

We actually still have lots of buildings all over the nation where people still come to church – but not enough BECOME church.

You become church when you get gripped by the grace of God and you can’t help reaching out to the broken world. You throw yourself fully into community with others who are similarly obsessed with Jesus.

You join the church, not just joining the membership list, you join yourself to other imperfect people and to the cause of Christ – you join in.

You become church when you add yourself, give yourself, and multiply yourself in others. You worship with all your heart, you serve, love and support. You give and take. You pray and speak positively. You forgive and are forgiven, you know and are known, celebrate and are celebrated.

We’re called to BECOME church that’s like ‘a city set on a hill that cannot be hidden.’ To become God’s answer to the problems of the world – defeating oppression by our love, crushing materialism by our generosity – and inviting everyone and anyone to move from isolation by community.

Church the way the New Testament conceives it is never meant to be something you go to, it’s somewhere you go from – and someone you (plural) are!

I’m not saying don’t come to church. Of course I’m not saying that. Too many Christians already try to go it alone and end up going nowhere. I’m saying remember we are the church!

We can meet in buildings, but we’re not defined by them. We come to him so we can go for him. Together. At Ivy we say our churches are meant to be like petrol stations. You can come and get filled up, but then you don’t just park on the forecourt! You only come, so you can GO, where God sends you.

You need to COME, because the world needs you to go.

The world doesn’t need any more people coming to church. But it desperately needs more disciples, fully sold out to the dream of becoming part of strong, growing communities. Self sacrificing people who will love Jesus enough to lay aside anything that gets in the way of reaching out to this broken world God loves so much, devoting themselves to becoming these kinds of churches.

Some people say, ‘I don’t know what the big deal is about coming to church.’ And I mean some Christians are saying that; and in a sense they’re right – because the world doesn’t need improving it needs saving. And ‘Coming to church’ isn’t going to save the world, or it would have done so by now.

The problem is not that not enough people come to church, it’s too many people just ‘come to church.’ That’s why it’s declining!

It’s sad and it’s ironic. Congregations are shrinking because they’re in maintenance mode. And that’s – boring. They’re ageing and dying, trying to bail out sinking ships, rather than launch more rescue boats.

I’m not praying for an increase in churchgoing.

Because if you just aim at having more people come to church, you’ll never have enough people coming, because you won’t have people going!