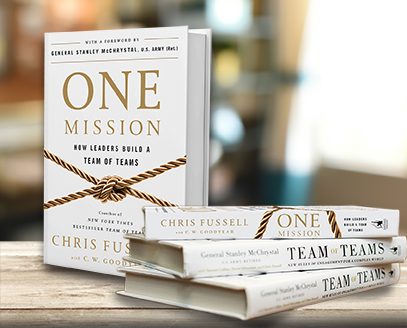 One Mission is my ‘must read’ leadership book so far for 2017. It follows straight on from another great book (Team of Teams) by the guy who wrote the Foreword – Gen Stanley McChrystal. I read that book and was blown away by it. Team of Teams documents how the Industrial Age introduced Frederick Winslow Taylor’s ‘Scientific Management’ model, which equated to Time and Motion/ Efficiency studies and Command and Control leadership. That used to serve us well when you were making Model T Fords, now – not so much (though its influence prevails far too much – for a crushing critique of how very unscientific that model actually is I recommend The Management Myth by Matthew Stewart). When McChrystal was placed in charge of JSOC, battling Al Qaeda in Iraq – he found that despite having all the men, the money and machines – they were losing against a far smaller group of insurgents in an agile, connected network organisation. The reason? They were efficient, but not effective. He was playing chess, while they were playing draughts! He had a hierarchy, they […]