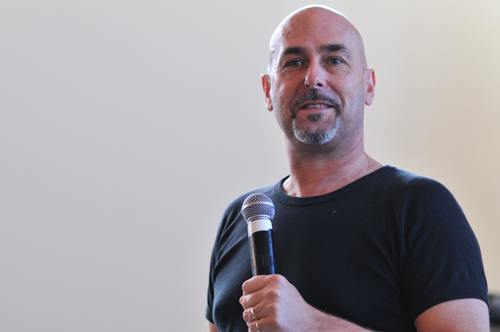 Only one Australian has ever won the Nobel prize for literature; Patrick White
A brutal, critical hater of the church
in his biography he wrote about how he was with his gay partner of 40 years when he went out on the farm to feed his dogs,

He fell on his backside, covered in mud and dogfood he heard a voice say ‘who the hell do you think you are?’

He thought God was speaking to him.

So he went to church next week with his partner

He went to the Anglican Church and sat at the back, where the Rector was telling people off for entering the jelly bean counting contest and being gamblers.
‘I realised whatever faith I had needed to be a private matter’

And too many churches are putting people like that off or telling them off
Rather than being with them.
Being their friends I
And saying ‘that God who was taking to you, he’s my friend and he wants to be yours too.’

Thailand
A friend was sitting in a cafe
A Buddhist monk approached him
‘I had a vision of Jesus Christ he told me to be here and Paul would tell me what to do.’
He led him to Christ
And He has in turn led 12 other Buddhist monks who follow Jesus.

We need people willing to nice out of the Christian bubble to where he’s already working, in the pubs and among the poor

We Christians have nothing to fear!
Why ?
God is on the move
Cf Aslan on the move.
It’s happening in the nations now, the thaw is happening now!
We are being set free from the frozen place.
God is about raising up an army.
God is winning!
There’s pain and suffering
But those days are numbered
And all heaven is breaking loose !
Get involved!

God is directing history to its true end
It’s our honour to be part of it.