I’m glad I didn’t post this immediately as I made the notes so it doesn’t come out with the flurry of other posts I made recently. This one needs some marinade time. My friends Alan Hirsch and Dave Ferguson wrote ‘On The Verge’ a little while back and it’s a game changer. At only £3.99 on Kindle now it’s a bargain as Alan’s theological and cultural awareness combine with Dave’s practical savvy to make a book that theorists can’t just theorise over – and practitioners can’t wait to practice. 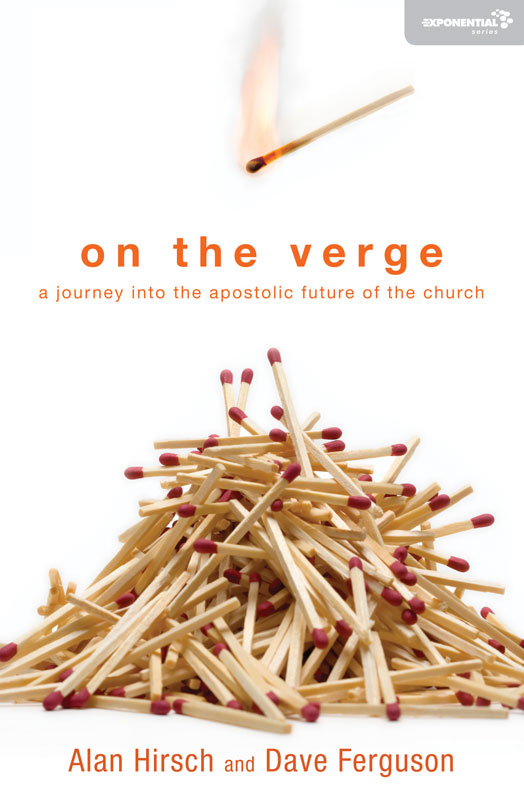 I have read the book several times privately then picked it apart as part of a Learning Community set up by Dave Ferguson of New Thing as I prepare to step further into birthing ‘New Thing UK’ – working to create a church planting movement and identify, train and release apostolic leaders across the UK and Ireland.

It was great to hear from Alan a refresh on some of the main ideas, and my notes on his brilliant seminar follow;

THE MISSIONAL CONVERSATION are you part of it?

You can make decisions now that will alter history, as long as you don’t leave it too long. We are a missional people. SENT.

If you want to know what it’s like to be unchurched/ dechurched go to visit a mosque.

Don’t make them do the missional work. We are to go to them!

There was a time when the church was in a place that if people were looking for God they’d come to church. That day’s long gone. But we still play the game as if it was that way.

Who do we need to change the church?

The 16% who are Innovators and Early Adopters;

People who feel there is something to be gained from thinking entrepreneurially. If you’re going to argue the toss over everything, you won’t be part of this.

But if Holy Discontent is what drives you….

We have to see that it’s Adapt or Die time.

There are very few growing denominations. Do you know of any? (NOTE: Actually I do, the Evangelical Free Church in Sweden, soon to be led by my friend @Norburg)

The best way to pass on tradition is not to wear your father’s old hat but to reproduce – new children. How? Church planting.

You need to make decisions now about what kind of church you want your kids to be a part of.

Capture imaginations. This is the first thing. Epicetus ‘It is hard to teach a man what he think he already knows.’ People THINK they know what church is. But the early church didn’t have steeples and choirs. They met on riverbanks and caves. The paradigm is vital.

The brain seeks for patterns to make meaning. And we as a group agree a paradigm, how it looks to us. Cf the Old woman/ young girl picture. When you can see one you can’t see the other.

Constantine is still the emperor of our church thinking. You don’t have permission to think differently in Christendom.

The alternative to it = movement. Movements are dynamic, changing, growing. It’s there in the Celts, in China, in early Methodism. Primal. Impacting.

It takes courage to see differently!

Code the system for change. How do you change paradigms? A sense of anomaly develops. Thomas Kuhn (maths – ‘The Structure Of Scientific Revolutions’). When the best practitioners of a paradigm say, ‘Yes… but – the way you’re looking at it doesn’t answer all the questions…’ then you bust the paradigm.

The others get together – and eject the old paradigm. Then they defend the new one! And so on.

The fish doesn’t know its wet.

You have to see – things – change.

New Thing (the church planting movement I’ve been challenged to spearhead in the UK and Ireland) are planting a new church every 10 days in USA. After 7 years they are at 50,000 churches – and they double every year. That’s a movement.

Look at / assess/ audit the ETHOS. The CULTURE. The Guiding story.

Check and change the LANGUAGE. Who’s your hero? If it’s Barth – you become a theological church. If it’s the nurse who crosses the street and sets up a homeless shelter…

Look at your branding. A good brand is a promise kept. Do you keep the promises you make? If not you ruin the brand.

Check Practices. That’s what brings the culture. The soul of the place. You can feel it. Some churches you feel ‘Oh no, I can’t do things here.’ And there are others where it’s free.

KEY leaders need to define the reality. The leader is the key to open the door. This is conceptual and irritating. Not everyone will do it – or needs to.

In Myers-Briggs terms, most people are S not N. So they ACT their way into new ways of thinking.

So you need to create some PRACTICES that help people do the new culture (eg. BLESS).

McDonalds don’t let the 18 year old make it all up. They coded it. That’s a bit too far, but we need to form habits.

4)   MOVEMENTUM – The flywheel effect as Collins describes it. It’s hard, then it gets going by itself.

The greatest resource, is the people. Dave Ferguson. ‘Lead with a Yes.’ Trust people. They want to change the world!

This stuff is pulled out in detail in the book On The Verge. Get a copy. These guys are Jedis.