On a scale of 1 to 10 (1 being the farthest you have ever felt from God, 10 being the closest you have ever felt to God) what number would you give to how close you feel to God today? Why? Kevin M. Watson. The Class Meeting (Kindle Locations 333-334). Kevin calls this The Transformation Question and suggests we should ask it of each other in small groups so that we are not just meeting for affinity or information, but transformation. I LOVE IT! I’m going to use it. How about you? What do you think? AND if you have time… what number do you give yourself today – why?  This is Quickblog. I read a lot and make a lot of notes, and through quickblogs I hope to share some of my pondering more regularly.

Great session from Dave today at the Growing To The Next Level gathering at Kingsgate Church, Peterborough – and I suspect the seven steps below could be adapted for many  things you might want to change in a church, organisation or business  This is not just about having some missional practices (like BELLS or BLESS) – but how do you create and sustain a missional culture? We’re on a journey with that at Community Church, Chicago. We want a Come and See environment (Near) But also Go and Tell. (Far) MC + MP = MM Multiplying Churches plus Missional People = Missional Movement 7 steps to create a missional culture Name it – we are not where we need to be. This cannot stay the same! Brand it – do the hard work of making hard things to do simple to understand. Give the people a clear understanding of the problem, the mission, and clear missional practices. Do it! YOU are the culture creator. You will reproduce who are, and get the culture you deserve. When you can say ‘I am […]

Tonight at Ivy Didsbury Andy Smith blew us away with an incredible talk about the Magi, those outsiders from the East who found themselves in Bethlehem shortly after Christ was born, and on bended knee gave the best of who they were and had to him. There was so much great stuff there I encourage you to subscribe to the Ivy podcast and listen to the talk in full when it’s up later in the week. But something Andy said almost in passing at the end really grabbed me. It was an epiphany at Epiphany! Here it is, as I recall what he said: “The wise men got there, and saw… a baby, an infant, a little child. But God says in Zechariah 4:10 despise not the day of small beginnings,’ and this child grew into the Saviour of the world.” As I sat there I thought about those VIPs. They came looking for the King of the Jews, right? What would that look like? They’d know what Kings look like. And they are somehow looking for God there, the […]

Despite what many people in our culture may think, anyone who reads the Bible will soon discover that Christianity is NOT a system for Good people trying to live good lives. When people say, ‘I don’t believe in God or Jesus – but I’m just as much a good Christian as you..’ You can be sure that probably through no fault of their own they either missed the point or were given a description of Christianity that was about religion and rules and quite rightly rejected it. But the REAL gospel – the good news, starts with the bad news that you’re not good. You’re more sinful than you ever dared believe; and more loved than you ever dared hope. Because of the cross of Christ, if we exchange our own messed up record, we get his spotless one. That’s how we end up being ‘counted or reckoned as good.’ Justified, the Bible says. Because of Jesus taking the punishment for my sins, I’m justified – it’s ‘justasifI’d’ never sinned. If that’s all news to you, please get hold of […]

Everyone on the planet is on a search for joy, but paradoxically most of those searching for it end up with broken lives and disappointment. Bertrand Russell had lots of money, sex and power, yet said ‘The centre of me is always and eternally a terrible pain – a curious wild pain – a searching for something beyond what the world contains.’ Where do you find what he (and everyone else) was looking for? Well CS Lewis said, “If I find in myself desires which nothing in this world can satisfy, the only logical explanation is that I was made for another world.” Do you find yourself longing for home? Lonely in a crowd? You were made for more! You were made for joy! Joy that’s not dependent on circumstances.  Krish once lived in Albania. He saw an eagle – the national bird – but it was in a cage, slowly disintegrating itself because of being bound in its circumstances. The apostle Paul was not confined by his circumstances. We can learn from him. Paul was in prison when he wrote […] 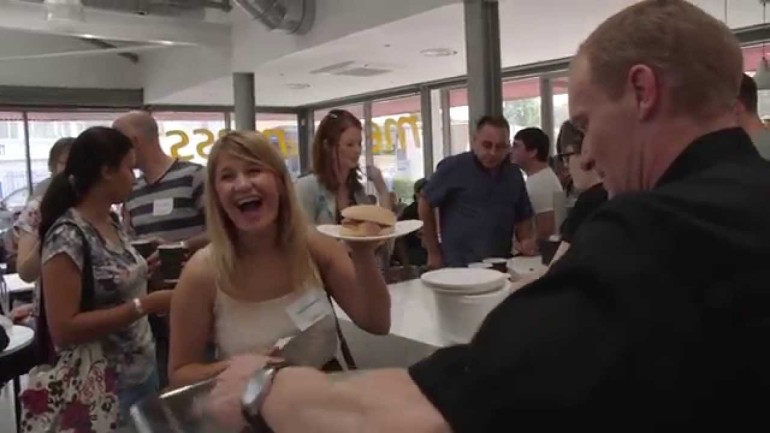 Because we all danced to ‘You got to move it, move it’ and because you have to get moving or don’t call yourself a movement – that’s what #IvyKinetic was all about. The whole church got equipped for the call – and hit the streets! To find out more or connect with us, check out the Ivy Church website or Like the Ivy Manchester Facebook page after you watch the video. If you’re a leader who wants to turn the church inside out to help people find their way back to God, you can connect with me after investigating NewThing to find out how we can together catalyse more reproducing churches that help people find their way back to God in the UK, Europe and around the world.

Luke’s description of the work of the Spirit – it’s a prophetic empowerment for ministry, not lying down.

You’ve heard people say OMG a lot. You’re going to hear a lot more about OMG in 2014. Thanks to the amazing people at UCB there’s a mini-book in preproduction I’ve written which will see 50,000 copies handed out next year, together with multiple thousands of FREE booklets, a DVD, a website full of OMG moments – and a FREE follow up course and book to help people who change their minds about God through it learn what it it is to follow. You can get a free sneaky peek at the content by watching this talk which a lot of it came out of. Let me know what you think, please.

I’m WAY excited! Carl Brettle from UCB recently challenged me, “If you wrote an evangelistic resource that will connect to 21st Century people, I think we could make thousands of copies available to give FREE to churches.” Woah. I met him a week or so after to see if he was serious or whether that was just a rush of blood. We discussed an idea I’d had about a year before that I’d been thinking and praying about and following that I’m just about to start writing and producing what will be at least two resources. I can’t give you the titles etc yet but there will be… 1) A short, punchy booklet and DVD resource linked to a website full of amazing testimonies challenging people to follow Jesus Christ 2) Another free resource for those who have done so (or are still on the edges of it) to help disciple them to make disciples. Both resources will have dedicated websites to really help people who engage with the material at every level and we are planning on having tens […]

The cross, crossed people out. They didn’t matter anymore. It was a death that deliberately stripped all dignity. You were belittled. That means you were being, littled. Jesus’ cross was inconsequential. The sign above his head ‘King of the Jews’ – a bitter irony. He was nothing. Crossed out.